They don't seem to sleep or rest for a second: The successful symphonic metal band DELAIN continues with full force in 2016. After an extensive world tour with bands like Nightwish, Sabaton and Within Temptation, the Dutchmen immediately vanished into their studio to create new song material. The result: An all new EP called "Lunar prelude" which provides two new songs: 'Suckerpunch', which is ideal to sing along to, and 'Turn the Lights Out'. In addition, there is a newly arranged version of 'The Human Contradiction' album track's 'Don't Let Go', four live recordings and an orchestral 'Suckerpunch' bonus – all of this proves once again why DELAIN is known for symphonic bombast with super catchy refrains and metal. The Dutchmen present tons of emotions. Definitely a "Prelude" , the EP increases the hunger for the upcoming album in 2016. 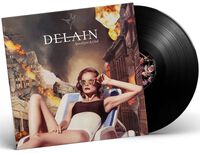